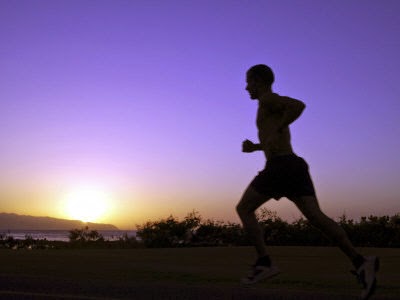 If you ever want a good exercise in communication with your significant other, go on a distance run together.

I'm an avid distance runner--I ran cross country through high school, and I've more recently done both half and full marathons (slowly). My husband and I have been training for an approaching 10 mile run. Usually we have to run separately, since our work schedules do not coincide, but, on the weekends, we can usually get a long run in together.

Now running is frustrating enough as it is. Anyone who runs knows that the benefits of running are far better than the actual activity itself. I'm never in a good mood by the end of my run--I'm usually hot, tired, sweaty, and in the mood to sit and cool down for a while. Then, after about a half hour, I start feeling pretty good and energized. But the run itself...

I was not prepared for the frustration of distance road running with a partner. When I run by myself, I can cross roads when I want, stop when I want, and turn around when I want, and I don't have to say anything to anyone--I just do it. When I'm with my husband, I have to convey all of these things in an intelligible sentence, which is not always feasible at mile 5 of an uphill--or at any other point, for that matter.

For example: say there's an approaching car on a mildly traveled road with lots of curves. What do you do? Well, my habit has been to cross the road so as to allow the car to continue on without having to cross the center line. My husband's practice is to stand his ground in the middle of the lane, forcing the car to briefly face oncoming traffic, if any. So, what did we do in this situation? Well, I often crossed, and my husband often stayed, creating a sort of runner "tunnel" through which the car had to travel. Or, one of us would make a mad dash at the last second to the other side of the road, followed by a statement such as "I hate when you do that!" or "Would you please say something when you're going to cross!!??"

We got a little bit better at it, but not much. We were constantly dashing around the road, trying to predict what the other would do. By the end, we had developed a sort of grunting, breathy language of commands, such as "Cruuss (pant) now," "Rit," or "Lft," usually accompanied by some vague pointing and/or flailing.

We were never in a good mood by the end of the run, especially if it was hot. But we agreed that it was definitely a good lesson in communication and adaptability. And we did enjoy the feeling of having accomplished something together, even if it was a simple 6 mile run. That feeling of enjoyment was usually enhanced by something like beer or ice cream, perhaps lessening some of the health benefits of running.

In any case, I still think I prefer to run on my own, but I like a good challenge with my husband :)

He texted me later:

"I'm sorry I left the way I did, babe. I thought it was a good opportunity to be a Dom, but I blew it by storming out."

There is no rule that an HoH has to be perfect in every situation. Passion and emotion can get the best of anyone, at times, and my husband and I both work to keep our negative emotions in control when we disagree. We've learned a lot already and we work hard at it, but, inevitably, we misstep and both act the way we don't want to act sometimes.

I know this question gets thrown around a lot in reference to DD, but how does an HoH handle a situation where a punishment would be helpful, but both he and his partner are at fault for something?

I suppose in any DD relationship, since no HoH on earth is perfect, there has to be an agreement that an HoH can use punishment in a situation that merits it, even when he has made a mistake as well. I can't speak for other couples (in fact, I'm interested to hear how others have handled this), but I can tell you how we deal with it.

This is something I foresaw when we first started DD. I knew there would be times when we both made mistakes--where we both said things we didn't mean. But I convinced my husband that it was OK for us to absolve our guilt differently. I reassured him that I would not hold a grudge against him when he needed to punish me for something he himself had also done. In fact, I asked him if he would spank me when we fought or argued disrespectfully, so that I could get rid of my bad feelings and move on from it. I told him, I would do whatever he wanted to help him move on from those situations, as well--though I knew he wouldn't be asking me to spank him, haha.

So it was, when we argued the other night, I hoped he would come home and give me the spanking I knew I deserved. But it seemed his conscience wouldn't allow him to punish me for something we'd both done. He decided not to spank or punish me for my role in our earlier fight. At first, I thought I was OK with it, but, as the night wore on, I felt as if there were still a wall between us--as if something were preventing us from moving on.

Upon my request, he finally took me over his lap before bed.

"The way you acted this evening was not acceptable, young lady," he said, as he smacked my bare cheeks. "Yes, we were both disrespectful, but this is how I deal with your disrespect."

He used only his hand to punish me, and I felt my hard feelings from the argument melting away with each blow.

His smacks were hard and firm for several minutes as he lectured me about disrespect. Then, they subsided into lighter, more playful smacks, and I knew the punishment was over. It was becoming something else.

We recently decided to clearly differentiate between pleasure and punishment spankings, but this seamless transition between the two did not bother me. I knew that I had been punished and that now I was supposed to enjoy the rest.

His playful smacks turned into light taps in all the right places. I squirmed over his lap, begging with my actions for him to stop teasing me, and he sternly told me to "Calm down, young lady," which only made things worse.

Finally, he flipped me over and did something to absolve his guilt ;) 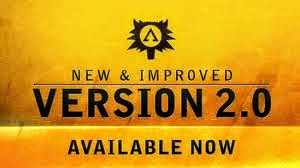 We've developed an unhealthy pattern over the past several weeks. I won't bother listing the possible reasons for it, but, the truth is, we are far from living DD 24/7. I'm OK with that. I don't need the lifestyle 24/7 to be happy, but I need to practice it sometimes--a couple times a day, once a day, even once every couple of days. But it's been more like once every other week, which is not good, because this is what happens:

It starts with one remark from me. I'll snap at my husband, say something disrespectful, or order him to do something, and he won't respond. Even if I apologize, he'll brush it off and we'll move on without any consequence other than guilt. But the hidden consequence of leniency, as any submissive in DD can attest to, is resentment.

It doesn't happen all at once, so it's hard to tell exactly when I begin to resent my husband. But I'll admit that if I get away with disrespect once, it's that much easier for me to do it again. Pretty soon, I'll have frequent bouts of disrespect, and my resentment will grow with each remark that goes unpunished, and I'll start to think that my husband doesn't care or that he's ignoring DD. And then one day, I'll have what I call a "mini meltdown," where all of my frustrations and stress and resentment come pouring out in a river of complaints, and I'll finally get a serious spanking.

Then I'll feel loved, cared for, happy, and respectful for a few days, until I get away with another remark, and the cycle will begin all over again.

This is no way to live a DD life. I like to compare our current situation to "going on a diet"--we are on the diet where we eat nothing but healthy stuff for one week and then completely let go on day 7 and binge eat all the junk food ever, rather than the diet where we eat healthy, but allow ourselves small treats every day or couple of days.

I need to stop "binge living" the DD lifestyle. I want to live it more frequently, but in smaller portions, rather than every other week in one large session.

So, after a particularly frustrating venting session of stress and resentment to my husband the other night, I told him that something needed to change. After some serious discussion, we came up with Domestic Discipline 2.0:

My husband decided to try this new version out last night when I rolled my eyes at something (jokingly!), and he made me stand in the corner, take off my clothes, hold my arms above my head for several minutes, and, finally, do 5 push-ups. Oh, and I also was spanked somewhere in the middle of that.

I have a feeling this new version of DD will not only improve our relationship, but also my arm strength!

Pants suck. I mean, they are practical, for sure, but I hate when I hug my husband, and he can't even grab my bare bottom because there is material and a belt blocking every access point. We usually don't have time for him to undo my belt and slide my pants down if we are having a quick hug before he or I leave the house.

But when I'm wearing a skirt or dress...that "quick" hug is also accompanied by some delicious hand on bare bottom contact. I get turned on by the simple act of wearing a skirt, knowing that my husband can, at a moment's notice, flip it up with a flick of his wrist and start caressing or smacking my bottom.

I bought this summer dress on sale a couple of days ago. It's cute, short, and flouncy--in other words, an all-access pass for my husband's hands to my bottom. Despite the obvious temptation, though, he did take the time to snap a picture: 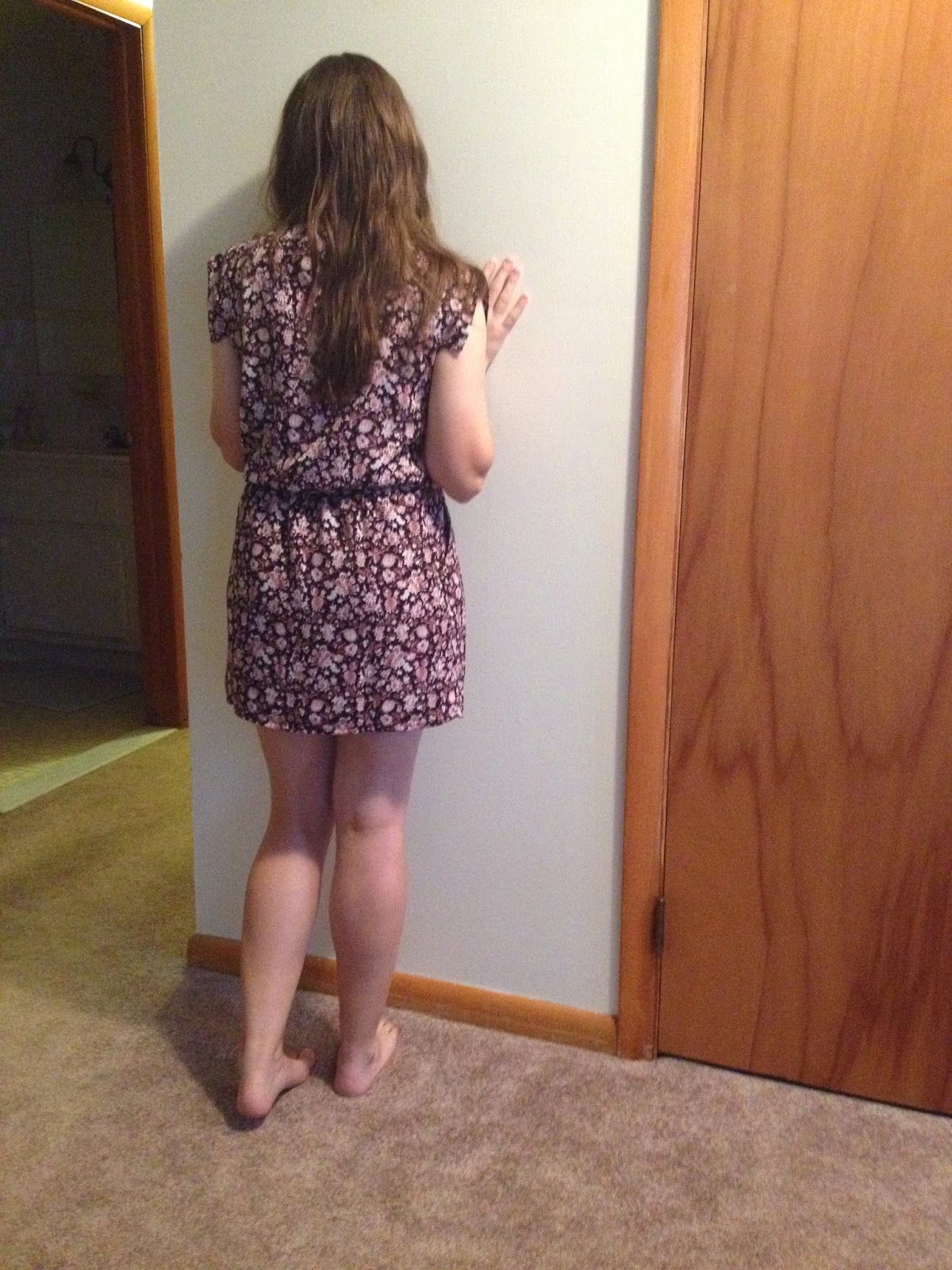 I've been wearing the dress a lot lately. I have to take advantage of it while I can, because fall is right around the corner, and I'll be right back in boring old pants, boots, belts, and sweaters. Cold weather is such a buzz kill!